Since I claimed at the outset that this new blog was for my tarot collection as well as the Vocaloid tarot deck I was working on in my idle hours, and since the Vocaloid deck has become thoroughly stalled because my writing has not been stalled lately (it’s something I was working on when I couldn’t think of anything to write), I thought I ought to post about one of the decks in my collection.  And since I both just got a really good space to do photography and just received a deck in the mail, I thought this was precisely the time to start on that!

Like most of my decks, this is one I backed on Kickstarter.  It’s a robot-themed deck called Tarotbot, designed by Michael Murdock.  So far, nothing has been said about if there were spare decks printed up (though there usually are) or where they’ll be on sale if there were, but it’s probably a safe bet they’ll be sold on his Etsy page.  (It’s still relatively early in the fulfillment period; I imagine after all the decks have gone out then there will be an update about fulfillment being completed and where additional copies can be obtained.)

The box art is a little bit eerie, but not off-puttingly so.  (Sadly, it is not the nice two-piece box depicted as a possible box on the Kickstarter page.  It’s just an ordinary tuck box, and rather hard to open, even as such things go.)

Here are the cards spread thinly out (teasingly out?), with the booklet below.  The cards are on an unusual stock; they’re thin, stiff and extremely shiny, so they almost feel like thin little sheets of plastic.  It’s not really what I’m used to in cardstock for any kind of deck, but it works beautifully, shuffles nicely, and suits the art perfectly.  The card on top there is one of the stretch goal cards, unique new cards for this deck. 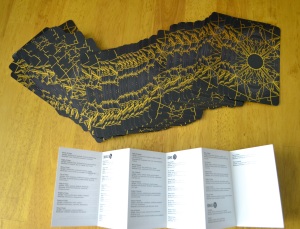 Here’s the back of the cards, and the booklet opened up (folded out, rather).  This photo was taken with the flash on so you could see the design clearly….

…and here’s the same shot without the flash, attempting to show how all those “yellow” lines in the previous image are all gold foil.  I wasn’t able to capture it well with my camera, but it’s very pretty in person.  The deck is edged in gold, too.

I had a look through all the cards and laid out a handful that particularly spoke to me in one way or another:

This mix contains two of the other stretch goal cards, The Anarchist and The Conman.  (I forgot to look at their meanings in the booklet that came with the deck, which was quite stupid of me…)

While I was at it, I decided to do a spread with the deck.  I haven’t done readings with most of my new tarot collection (an absurd situation!) because I didn’t have a good place for it and I had bought a book of 365 tarot spreads, each assigned to a specific day of the year…which really turned me off to trying to do readings at all, because many of them were badly done, tortured, and/or had zero usefulness to my life.  (Seriously, one of them was the “Get out of debt spread.”  Which says all sorts of terrible things about our society if the author of the book felt she could safely assume that was something that applied to everyone.  But it does not apply to me.  I have no debts, thankfully, so what was I supposed to do with that spread?  Likewise, all the myriad romance spreads were useless to me, as I am asexual and aromantic.)

Anyway, I decided to give it a go with this one, just doing a simple three card spread, the typical Past, Present, Future arrangement…

So there they are, dealt out.  (Which actually gives you a better view of the gold foil than the photo above does…)

The booklet’s description of the card’s meaning is a bit blurry in this photo (sorry!) but it’s clear enough.

And the third card, the Six of Cups.

I think in this case, the World should be interpreted more literally as exactly that, the world itself as we knew it in the past.  The inverted Emperor’s connotations particularly of rigidity and coldness sum up our current world pretty well.  And the Six of Cup’s potential meaning of “healing” for the future is particularly apt, since if there’s anything that needs to be in the future for our current COVID-19 dominated world, it’s healing.

…and if there’s anything else that should be said in a post sharing a new tarot deck, I’m not sure what it is.  I’m new to this, after all.

(But hey, at least I’ve posted something for the first time since August!)